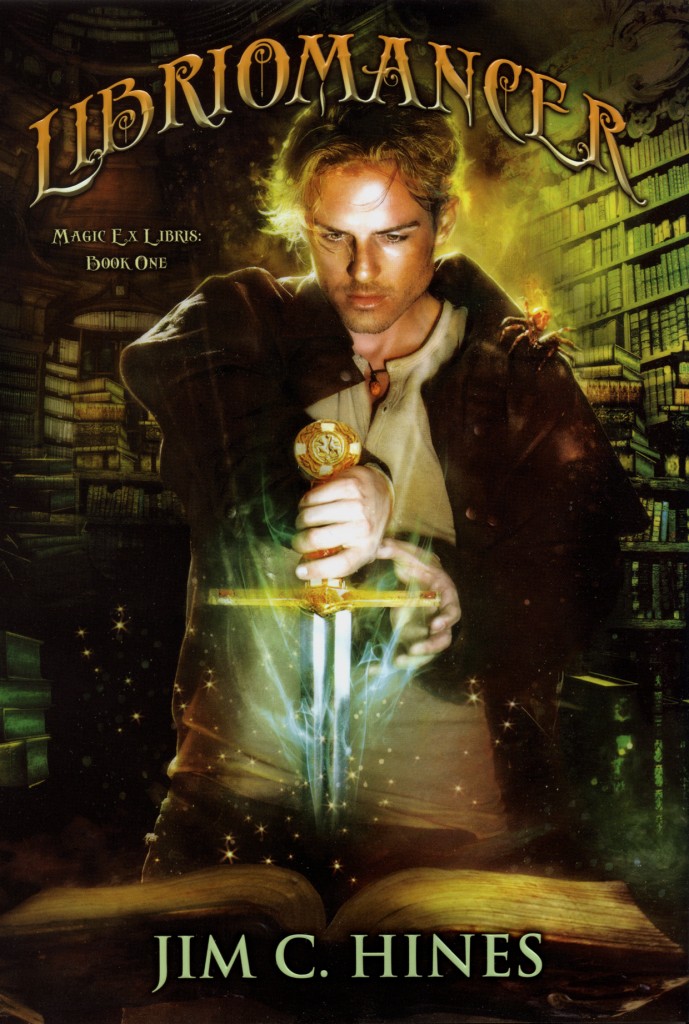 Isaac Vainio is a Libriomancer, a member of the secret organization founded five centuries ago by Johannes Gutenberg. Libriomancers are gifted with the ability to magically reach into books and draw forth objects. When Isaac is attacked by vampires that leaked from the pages of books into our world, he barely manages to escape. To his horror he discovers that vampires have been attacking other magic-users as well, and Gutenberg has been kidnapped.

Libriomancer by Jim C. Hines was a really fun book to read, it is another book series that I wish I had discovered much sooner than I did. As I mentioned in my last review is really easy to find urban fantasy to read these days as it seems to be everywhere I look, it’s difficult to find good urban fantasy. So when I find books like Libriomancer I tend to read through them ridiculously fast. This book was so good I ended up reading the entire series in under a week and am already desperately waiting for the next book to release. It probably has the greatest magic system I have ever read about in any book, I can’t say how much I wish Libriomancy really existed in our world.

Founded by Johannes Gutenber over 500 years ago the Libriomancers are a secretive group of men and women with a very unique gift — they are able to reach into almost any book that exists and pull out an item from within to use. Need to sneak through a building undetected? Why not just pull an invisibility cloak from Harry Potter, or a shrink ray from pretty much any sci-fi book in existence. Isaac Vainio is one of these Libriomancer, but unlike the rest of his brothers and sisters in magic, Isaac has been stuck with a desk job in the middle of nowhere Michigan, about as far away from the rest of the world and Libriomancer politics as it is possible to get. However, when a group of Sanguinarius Meyerii — sparkling vampires who have been accidentally released between the pages of a book attack him in an attempt to learn Libriomancer secrets Isaac soon finds himself on the run. It will take his magical fire spider Smudge, a beautiful Dryad and his vast collection of science fiction noels to help Isaac find out just what the hell is going on, and keep himself alive long enough to do something about it.

I really can’t say enough how much I loved the magic system contained within this book, it is just awesome. There is just something about reading a book and have it mention another book or series I enjoy reading. This not only happens all the time in Libriomancer, but when it does it is usually when someone is reaching into the book references and pulling an item out of it to use. These references aren’t just used as gimmicks either, some of the items pulled from the books act as maor plot points for the story. Just trying to catch all the different books referenced and trying to figure out what item the Libriomancer is going to pull from the books is really fun. It makes the book and series really rereadable — at least to me it does.

I think anyone who enjoys reading urban fantasy will really enjoy the Magic Ex Libris series as a whole, I think about every book I’ve ever loved is mentioned in some way in the series. Just writing this review makes me realize I have to start rereading it again, which is not a good thing when I have to be up for work in less than 5 hours.