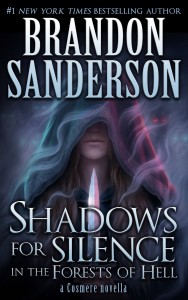 When the familiar and seemingly safe turns lethal, therein danger lies. Amid a forest where the shades of the dead linger all around, every homesteader knows to follow the Simple Rules: “Don’t kindle flame, don’t shed the blood of another, don’t run at night. These things draw shades.”

Silence Montane has broken all three rules on more than one occasion. And to protect her family from a murderous gang with high bounties on  their heads, Silence will break every rule again, at the risk of becoming a shade herself.

I wasn’t sure what I would think of Shadows For Silence In The Forests Of Hell when I started reading it, I had heard a little too much about how short it was compared to the rest of Brandon’s stories. While I don’t think it was long enough to justify it being called a novella, the fact that it’s so slow is a testament to Brandon’s skill as a writer. He has taken a very short story and filled it with an impressive amount of character and detail without having the story feel weighted down.

Silence Montane is a Forescout–those who were the first people to leave the Homeland to explore and settle a new continent. She has learned to survive in a world where the very trees around you seek your blood, and the shades of the dead seek to destroy you. The owner of one of the safest waystop in the Forest, Silence will do whatever it takes to protect her waystop and keep her family safe, even if it means breaking every rule of survival she has learned from birth.

Despite the lack of the interesting magic systems that have become the trademarks of a Brandon Sanderson story, Shadows For Silence In The Forests Of Hell is probably one of the best things I have read this year so far. I did not expect to read one of Brandon’s stories and be glad I left my bedroom light on while I did so, it is truly the creepiest story I have seen him write so far. Threnody may not be one of the more important Shard/Cosmere worlds, but I really hope Brandon chooses to revisit it some time in the near future.

While any fan of Brandon Sanderson would love this story as much as I do, I would really suggest anyone who has not read any of Brandon’s works read it as well. I would be shocked if they were not a die-hard fan by the end of the story.