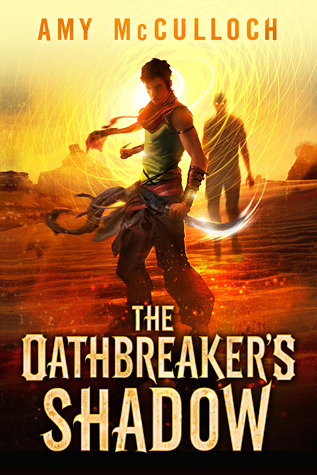 “My word and my life are yours. This is my absolute vow.”

In the land of Darhan promises are bound by magic, tied into knots, and worn with pride. Those who break them are physically scarred, cast out into the desert, and tormented by vengeful shadows of their treachery. So when Raim agrees to give his life as a warrior to the future Khan, he knows that he must honour his word until the day he dies.

But on the night he takes his vow, Raim accidentally breaks a mysterious promise that he has worn since the day he was born. Yet how can he break an oath he has no memory of making?

With the dark mark of a traitor seared into his skin, and forced into exile, Raim flees on a journey that will reveal the true meaning of honour and uncover truths that will change his world for ever.

The Oathbreaker’s Shadow, the debut novel of Canadian author Amy McCulloch, is a fantasy that breaks tradition. Instead of being set in a Medieval England expy, it’s based around Mongolia; instead of dealing with the standard fantasy creatures like elves and unicorns, it features mystical creatures invented for the setting; instead of magic being something known only by a few people, magic permeates every day life, and yet as we find out later, magic isn’t really understood or used to its full potential. It’s different from most books in the genre and offers a fresh break from the norm.

The book follows Raim as he tries to find out what promise he broke when he took his absolute vow and get forgiven for it, the only way an oathbreaker can remove the scar marking them and his only hope of getting back into society. Of course, this isn’t quite as easy as he thinks; he has no way of knowing who he made the promise to and no hope of forgiveness until he finds out. On the way, he learns of a traitor that overthrew the Khan and puts at risk everything he holds dear, including the absolute vow he just took.

One of the predominant themes running through the book is that of the nature of promises and honour, a theme which I suspect will be explored a lot more in sequels. Raim spends much of the book coming to terms with his feelings about oathbreakers and how people have come to see him. The book takes pains to show how many of the oathbreakrs are good people who suffered a moment of weakness, or had justified reasons for breaking their vows. The characters are sympathetic and realistic, making their stories and problems interesting to read about.

Overall I quite enjoyed the book; it was something new and interesting and a refreshing break from the standard fantasy tropes. I was worried I wouldn’t be able to properly get into it because I had a fairly bad book hangover from the last book I read before this; to my pleasant surprise I was able to get into it easily (and ended up with a double book hangover for my trouble, from this book and the one before). I look forward to reading the sequel.