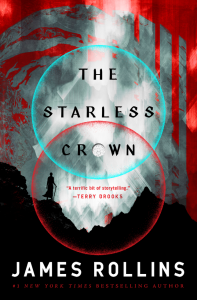 An alliance embarks on a dangerous journey to uncover the secrets of the distant past and save their world in this captivating, deeply visionary adventure from #1 New York Times bestselling thriller-master James Rollins.

A gifted student foretells an apocalypse. Her reward is a sentence of death.

Fleeing into the unknown she is drawn into a team of outcasts:

A broken soldier, who once again takes up the weapons he’s forbidden to wield and carves a trail back home.

A drunken prince, who steps out from his beloved brother’s shadow and claims a purpose of his own.

An imprisoned thief, who escapes the crushing dark and discovers a gleaming artifact – one that will ignite a power struggle across the globe.

On the run, hunted by enemies old and new, they must learn to trust each other in order to survive in a world evolved in strange, beautiful, and deadly ways, and uncover ancient secrets that hold the key to their salvation.

But with each passing moment, doom draws closer.

WHO WILL CLAIM THE STARLESS CROWN

I’ve been in a  bad reading slump these past few months as I haven’t really been able to get into any new books or series and instead have just spent my time rereading some of my favorites. So I have spent a lot of my time lately looking for that one book that’s good enough to shake me out of this slump so I was excited to receive an early copy of this audiobook to listen to. I’ve looked at James Rollins books before and while they look good, I tend to lean almost exclusively towards science fiction and fantasy so I’ve never really checked them out before. The Starless Crown by James Rollins was an intense and fascinating read that managed to tick off every box in my “What I love to read about most in books” list.

A unique and interesting magic system? Check. A well-built and fully fleshed-out world full of interesting characters and a great plot? Check. A ragtag group of adventurers who would normally never get along or spend any time together being forced to work together to survive? Check. It took maybe 2 or 3 chapters before I was so sucked into The Starless Crown that I never wanted it to end because I just didn’t want to stop reading it. My favorite character in this book is easily the nearly blind Nyk but I don’t think I disliked a single character in the book. Heroes and villains alike are all so great that it’s impossible not to love them.

One of the only things that had me hesitating with this book is the fact that I hadn’t yet listened to anything narrated by Nicola Barber and I’m always a bit hesitant to get books featuring narrators I haven’t checked out yet. Lucky I can happily say that Nicola Barber did a fantastic job narrating this book. She managed to give every character their own unique voice and packed enough emotion into her narration that you could almost feel what the characters were feeling at the time. Something I think a lot of narrators try but a surprising few actually managed to do.

All in all, I loved this book and I was a bit bummed out when I had finished listening to it, but I’m already excited for whenever the next book in the series releases. I also won’t hesitate to recommend this book to anyone looking for a good book to read or listen to.