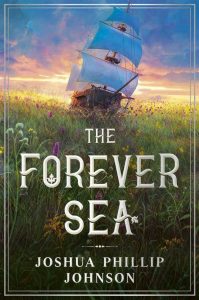 The first book in a new environmental epic fantasy series set in a world where ships kept afloat by magical hearthfires sail an endless grass sea.

On the never-ending, miles-high expanse of prairie grasses known as the Forever Sea, Kindred Greyreach, hearthfire keeper and sailor aboard harvesting vessel The Errant, is just beginning to fit in with the crew of her new ship when she receives devastating news. Her grandmother–The Marchess, legendary captain and hearthfire keeper–has stepped from her vessel and disappeared into the sea.

But the note she leaves Kindred suggests this was not an act of suicide. Something waits in the depths, and the Marchess has set out to find it.

To follow in her grandmother’s footsteps, Kindred must embroil herself in conflicts bigger than she could imagine: a water war simmering below the surface of two cultures; the politics of a mythic pirate city floating beyond the edges of safe seas; battles against beasts of the deep, driven to the brink of madness; and the elusive promise of a world below the waves.

Kindred finds that she will sacrifice almost everything–ship, crew, and a life sailing in the sun–to discover the truth of the darkness that waits below the Forever Sea.

I think just about everyone knows the saying “Don’t judge a book by its cover”, but that’s exactly what I did when I first saw the cover of this book and decided I was going to read it no matter what it was actually about. I mean, when it comes down to it, isn’t that exactly what a cover is supposed to do? Draw you in and make you want to pick up and check out or read a book? Happily, I can say that The Forever Sea by Joshua Phillip Johnson was a fun and engaging book that was all but impossible to stop reading.

While I thought the plot and all the characters were just great, what really stood out to me about this book was its worldbuilding. With The Forever Sea, Joshua Phillip Johnson has managed to build a truly fantastic world that somehow managed to be both alien and familiar at the same time. There are a lot of books out there about airships and pirates and whatnot, but I can’t remember any that feature said airships being powered by magical hearth fires or where the pirates are and sailors are fighting it out above an endless sea of grass. It seems like such a weird concept to me but somehow the author makes it work so well.

As good as this book was and as much as I enjoyed it, I do think Joshua Phillip Johnson spent a little too much time describing the various colors and types of grass that make up the Forever Sea and not enough time figuring out just where he wanted the book to go in the end. I really hate to comment on an ending of a book because I do worry about spoiling things for people but my biggest issue with The Forever Sea is how little resolution I felt like we got by the end of the book. There was a lot of tension built up over the course of the book and very little was done to relieve that tension by the time the last page comes.

All in all, though I would say that The Forever Sea is a great book set in a truly interesting world that I think just about anyone would enjoy reading. I’ll definitely be eagerly awaiting the next book in the series!

I received a free copy of this book one exchange for an honest review.