I write historical fantasy (and science fiction). My second historical fantasy, Silverwolf (sequel to Winterwood) came out in January 2017 from DAW. They are the first two parts of the Rowankind Trilogy set in 1800 – 1802 in a Britain where Mad King George is on the throne, the Americans have parted company from the British, and the French have rebelled against their monarchy. Napoleon Bonaparte is knocking at the door and Britain is at war – yet again – with the French. The Age of Enlightenment is on the cusp of giving way to the Modern period. The Industrial Revolution has begun. Steam pumps are in use, but we’re a few years away from railways, yet.

Winterwood and Silverwolf are set firmly into this historical period… except… there’s magic which has inevitably caused some changes.

So how can you tell whether a book is historical fantasy or alternate history? And does a strict definition matter, anyway? Alternate history usually stems from a point at which history in the book diverges from our known history. Take, for instance The Man in the High Castle in which the changes to the timeline stem from Germany and Japan winning the Second World War and each occupying half of the USA. There’s no magic. The story follows plot-logic,  based on that one important historical change

Let’s take concept first – whether it’s an America in the 1960s under German and Japanese rule, or it’s a Britain where Richard III wasn’t killed at the Battle of Bosworth and went on to rule wisely for the next forty years, thus eliminating Tudor history altogether – there has to be a tipping point between history as we think it happened, and the alternate history spinning out before us. On top of all this, the writer layers historical accuracy, or at the very least verisimilitude. The jumping off point for the story has to appear to be as accurate as possible. Start from the real, introduce one major change, and from there try to make history follow logical steps. You can then drop compelling characters and a big dollop of plot into the concept and the solid background, and take it from there.

But when you add magic, does it automatically become historical fantasy? 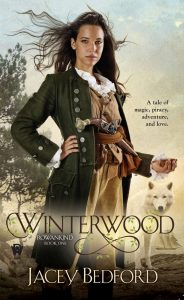 My first Rowankind novel, Winterwood, is a historical fantasy, with an alternate history thread. Something happened (no spoilers) at the time of the Spanish Armada which, over 200 years later, is about to have huge repercussions. The timeline has hardly been altered, thus far. Mad King George is still mad and Napoleon is causing trouble in Europe, while at home there’s an unpaid army of not-quite-human rowankind, biddable servants, loyal workers, underpinning the economy. Where did they come from? Why does everyone take them for granted? Since this is a fantasy as well as alternate history there’s magic as well. And because there’s magic, the government of the day does its best to regulate the use of that magic by licensing witches, restricting the type of magic they and use, and harshly prosecuting anyone who steps outside their arbitrarily drawn boundaries

I did an enormous amount of background reading and museum-hopping to try and make the historical background believable, but this isn’t Regency romance territory. My heroine, Rossalinde (known as Ross) hasn’t stepped out of a Jane Austen novel. She’s no society miss seeking a gentleman who must be in want of a wife. She’s a cross-dressing captain of a British privateer tops’l schooner. She sails the high seas, accompanied by her crew of barely reformed pirates and the jealous ghost of her dead husband. When drawn to her estranged mother’s deathbed, she inherits a half-brother she didn’t know about, and a task she doesn’t want. Completing that task means she’ll have to uncover family history which will lead her right back to that point where history as we know it diverged from history as Ross knows it. And to complicate matters there’s a handsome man who seems to know much more than he’s letting on… It’s an adventure story with magic and romance.

The story and characters always come first for me when I’m writing, but there was a lot of minutiae to research. In this case it required studies of contemporary Plymouth and London street maps, old London Bridge, and even what Vauxhall Pleasure Gardens might look like out of season. 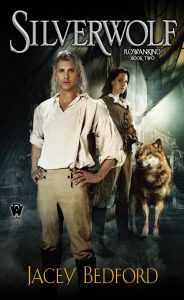 Silverwolf, the sequel, published in January 2017, moves us into Industrial Revolution territory where there are problems caused by the sudden loss of cheap labour. Ross (an unlicensed witch) and her lover Corwen (a wolf shapechanger) have to deal with the results of the rowankind regaining magic that had been stripped from them. They are called to Yorkshire to help Corwen’s family. His father is ill and his older twin brother, the heir to the family’s estate and mill, has gone missing, leaving his mother and his younger sister, Lily, to deal with the problems.

It’s easy to hang a story on the large sweep of political history, but it’s the little things that sometimes trip you up. For instance: who made the red coats worn by the British Army in 1800? (This was half a century before the army’s own clothing factory in Pimlico.) I can find out who was responsible for ordering them, and why they were red, and even how much they cost and what rake-off the regimental colonels pocketed, but before the advent of the sewing machine and the factory system, whose nimble fingers actually stitched the seams together and under what conditions? Are we talking about sweatshops, or maybe even a small army of out-workers, or a mixture of the two? Who were the middle-men involved? It’s all fascinating stuff.

I found the answers eventually, and then I put a goblin in charge. Hey, goblins have to make a living too, you know.

Ross and Corwen end up in London, searching for Corwen’s errant brother, where they discover a large and sinister plot involving government agents and the rowankind. And it turns out that an old, and very dangerous, enemy from the first book is not quite as dead as they thought he was.

I had a great time writing it. I hope you enjoy reading it. Perhaps you can decide whether it’s historical fantasy or alternate history.

Jacey Bedford is a British writer from Yorkshire with over thirty short stories and four (so far) novels to her credit. She lives behind a desk in an old stone house on the edge of the Pennines with her husband and a long-haired, black German Shepherd – that’s a dog not an actual shepherd from Germany. She’s the hon. sec. of Milford SF Writers’ Conference, held annually in North Wales.

DAW books has generously provided us with two sets of the Rowankind series (Winterwood and Silverwolf) to giveaway. This giveaway is only open to the US and Canada.