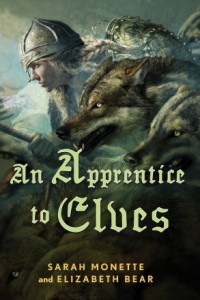 The warrior culture of Iskryne forbids many things to women—and most especially it forbids them bonding to one of the giant telepathic trelwolves. But as her father was no ordinary boy, Alfgyfa is no ordinary girl. Her father has long planned to send his daughter to Tin, a matriarch among the elves who live nearby, to be both apprentice and ambassador, and now she is of age to go.

I almost didn’t want to start this book when I received it in the mail, anything that features elves these days tends to make me think twice about reading it. An Apprentice to Elves however, turned out to be an engaging read that I ended finishing in a single sitting. Monette and Bear have managed to take aspects of Norse and Roman mythology and culture and create a beautifully vibrant world full of interesting characters and a multitude of fascinating, conflicting cultures. While An Apprentice To Elves is the third book in Monette and Bear’s Iskryne trilogy, you wouldn’t know that going into it, it works perfectly as a stand-alone novel.

War has come to Iskryne, and instead of running with the trelwolves alongside her father and grandfather like she wishes — but women are not allowed to do so, and Alfgyfa finds living among the nearby elves and apprenticed to one of their greatest smiths. For the most part, Alfgyfa enjoys the life of an apprentice smith, she has learned to love the metal and the forge, and could be perfectly content if it were not for one thing; she can still remember the feel of the trelwolves in her mind. Alfgyfa is soon thrust into the very center of the war, however when she is asked to be an ambassador between the elves and her people.

The amount of detail and world building that has gone into An Apprentice To Elves is amazing, and I can only imagine the amount of time that was spent on research. The only thing I thought was missing from the book was some sort of pronunciation guide. I gave up fairly early on hoping to pronounce any names right and feel like it would have made an already enjoyable book even better.

This really was a fascinating novel to read, and I’m glad that we are able to provide one lucky person a chance to read it as well, courtesy of Tor Book.

Open to North American residents only, follow the instruction below and enter for a chance to read, and good luck!