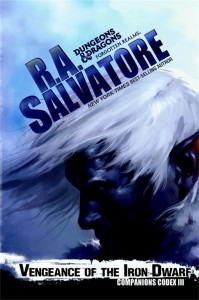 In the evolving world of the Forgotten Realms setting, the Sundering has given way to months of cloud-cloaked darkness, and war rages under that oppressive sky. The orcs have  broken a hard-fought treaty that’s held, however tentatively, for a hundred years, and the time to settle old scores has devolved into an all-out brawl for control of the ancient realms of the North.

Vengeance of the Iron Dwarf is the third book in R.A. Salvatore’s Companions Codex and the twenty seventh book featuring the Drow Ranger Drizzt Do’urden. Like with every other book in the Legend of Drizzt I found myself counting down the days till the next installment, and I have to say that Vengeance of the iron Dwarf did not disappoint in the least. Personally I found it to be the best book in the series by at least a decade. It has everything in it that I think makes the Forgotten Realms book so much fun to read.

Vengeance takes up right where Rise of the King leaves off, the Treaty of Garumn’s Gorge has been broken and the orcs are once more waging a proxy war against the people of the Silver Marches. With the orcs destroying or besieging all  of the dwarven kingdoms, it’s up to the Companions to try and free them to give the Silver Marches a fighting chance. But with Regis and Wulfgar trapped in the upper levels of the Underdark, and the rest of companions trapped in Mithril Hall will they be able to do it?

Vengeance of the Iron Dwarf has everything in it that I have come to love about the Legends of Drizzt. Salvatore has always put a great deal of thought and detail into the massive battles and one on one duels that fill the pages of the series, and with Vengeance has taken it to that next level. The Companions are amazing as always with each of them growing in ways I’d have never expected back in the early days of Drizzt Do’Urden. Cattiebrie and Regis stood out in this book the most to me, with Cattiebrie really coming into her own as a powerful mage, and with Regis coming to his friends rescue in miraculous ways instead of the other way around.

The only thing I was really disappointed in with this book was Drizzt himself, he just doesn’t seem to be the self doubting, moralistic drow I have grown to love. It is my hope that time among his friends outside of war will return him to the person he once was!

I think anyone who is a fan of the Forgotten Realms books will enjoy reading these books, as like all the other Drizzt books I think they are going to have repercussions that echo across the entire series. I would only suggest that anyone who has not read any other books in the series start from the very beginning, otherwise they are guaranteed to be confused in every possible way.

Vengeance of the Iron Dwarf is scheduled to be published March 3, 2015 by Wizards of the Coast.

I received a free copy of this publication in return for an honest review.