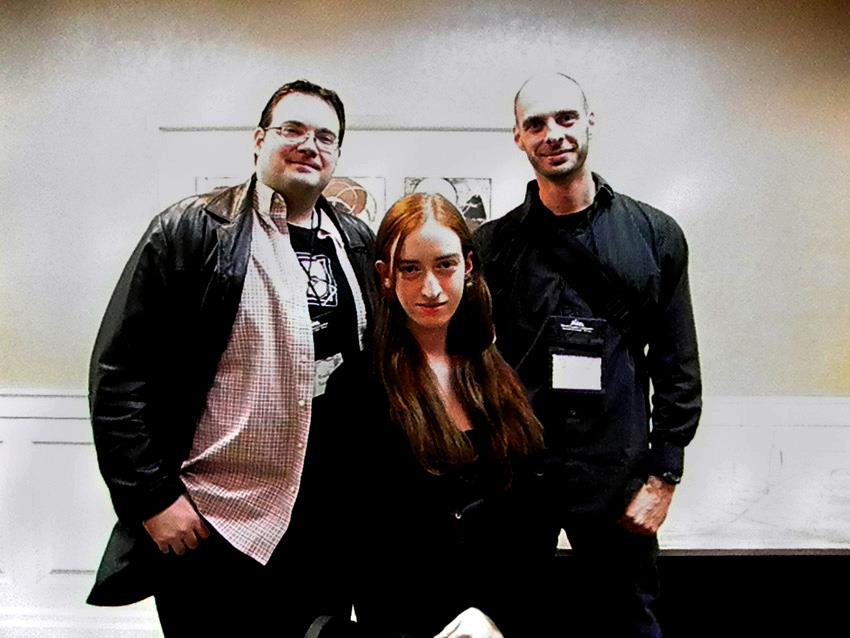 This past weekend I was at the World Fantasy Convention in Toronto, and Brandon Sanderson, author of the Mistborn series, The Way of Kings, and co-authored the last books in the Wheel of Time series was kind enough to let interview him earlier today.

For convenience, BS = Brandon Sanderson, and R = Rebecca (myself),

RAFO = Read And Find Out

R: So.. Hoid. We see him in almost all of your books, though I don’t think I saw him in Emperor’s Souls..

BS: He’s referenced in Emperor’s Souls, but he got cut from the book.. I actually wrote the scene with him in it.. But it didn’t fit so we had to cut it.

R: Are we ever going to get his origin story, or learn more about him?

BS: Yes, we definitely will learn more about him.. A book that has more of him is Dragon Steel.. Which I wrote when I was undergraduate as my honours thesis.. It’s not his origin story, but it’s one he’s mostly part of. We will find out everything, and get the complete story for him. It will happen eventually.

R: Well, I look forward to reading more about him… He’s an interesting character. Also, a question about Wheel of Time.. But Mat Cauthon’s fox head medallion is described as having only one eye, and that’s in the shape of the ancient symbol for Aes Sedai.. Was this foreshadowing the events that happened the Mat in Towers of Midnight?

BS: I believe it was probably foreshadowing.. James knew since book one what was going to happen, so I would say yes. My instincts say yes, but there’s nothing in his notes which said so one way or another. I’ve always felt that it was

R: In Lord of Chaos, there’s a point when Rand is in Shadar Logoth, and Lews Therin whispers to him “I must kill Demandred.” Is there some sort of connection between Demandred and Shadar Logoth?

BS: There may well be… I’m not sure if I can answer that question, so… RAFO.

R: Okay, so can Darkfriends or maybe even Forsaken be bound to the Horn?

R: I’m pretty much asking about Verin, and the likelihood of her being bound.

BS: Okay, I don’t know that there would be anything forbidding Verin from being bound to the horn..

R: Is there any mention of that in a Memory of Light?

R: Alright, thank you though.. Also, not so much about your stories in particular.. But you’ve written a lot of different types of books, the huge epic fantasies, short stories.. Different types of fantasy, and the odd ones like Legion.. Which do you enjoy writing the most?

BS: Answering questions like this one is difficult, it’s like “Pick your favourite food”, if you eat that food every day you’re going to eventually hate it.. Or slowly find the food less and less enjoyable. For me, that’s how it is with writing.

Epic Fantasy is my favourite form, but if I’m only ever doing Epic Fantasy, I feel like I will get burned out on it, and I’ll stop enjoying it as much and so I don’t want to see that happen.. So when I start to feel like it, I let myself within certain bounds write whatever I want to write so that when I get back to Epic Fantasy I’m feeling fresh. It’s not a matter of what I like to write the most, it’s a matter of what I’m feeling like at the time. Sometimes you may not want to eat your favourite food,

R: And when you’re switching between these different types of stories, are there any major difficulties that you face?

BS: If I do, then it means something’s going wrong and I kind of need to look at why I’m trying to write it… Switching is not hard, usually.. You get to know your writing style, you get comfortable with how you approach things.

BS: It should be Christmas 2013, that’s what we’re aiming for.. In fact, I have to name it this weekend so TOR can start the publicity for it.

R: And then we’re also getting A Memory of Light, obviously, and The Rithmatist?

BS: Yes, that’s the book I wrote just before Wheel of Time in 2007, back before I was offered a Wheel of Time offer.. And it languished for years because I was so busy with Wheel of Time and when I had any free time, The Way of Kings, I wasn’t even able to do revisions.. The three of four months it would have taken would have slowed down one of those two books, so I was able to take those months after A Memory of Light was done.

R: And is there anything next year?

BS: I don’t know when Steelheart will be out, but probably 2014.. But it is on people’s radars, this is another one before I took up before Wheel of Time, but I wrote it in gaps between books, so people know about it. I’ve been trying to shop it Hollywood for years, but I was finally able to polish it off and sell it. Once Wheel a Time was done I was finally able to spend time on these things which have been put aside for years.. Things like this are good, but to give them the time to make them great while I was working on them would have taken time away from a Memory of Light.. And it wouldn’t have been right to let them demand that time, so it wasn’t until recently that I’ve been able to give them that time.. So, I think that’ll be 2014, but we do get three books next year most likely.

R: Yep, and that’s great.. I’m looking forward to reading them all.. and with a Memory of Light being finished, is it odd not having it to work on?

BS: It is.. It’s very strange experience since it’s been such a part of my life for so long, to not have it to work on.. But I do intend to be a part of fandom for the rest of my life. So, there is that..

R: I know a lot of people are looking for it, and there will always be more theories.. I do remember last year when I spoke with you, you did say there will be loose ends, so people will be theorizing on those for a while.

BS: Yeah, there will be loose ends, and I can talk to that when the book comes out.

R: Alrighty then! You’ll just have to come back to Toronto then.

R: Alright, I think that’s it… Thank you!

Brandon also read a passage from A Memory of Light while he was here in Toronto (the beginning of the first chapter/the wind scene), as well as a bit from the Stormlight Archive Book 2.

My reviews of Brandon’s books: