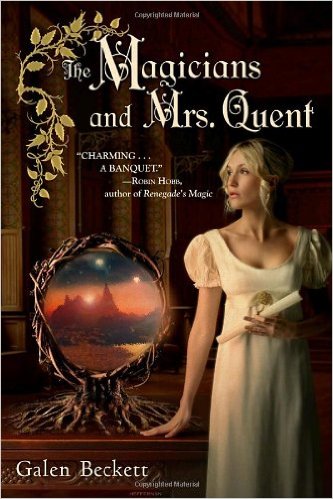 Of the three Lockwell sisters – romantic Lily, prophetic Rose, and studious, book-loving Ivy – it’s Ivy, the eldest, who’s held the family together after their father’s silent retreat to the library upstairs. Everyone blames Mr. Lockwell’s malady on his magickal studies, but Ivy still believes – both in magick and in its power to bring her father back.

Yet it is not until Ivy takes a job with the reclusive Mr. Quent that she discovers the fate she shares with a secret society of highwaymen, revolutionaries, illusionists, and spies who populate the island nation of Altania. It’s a fate that will determine whether Altania faces a new dawn – or an everlasting night.

That’s the summary for The Magicians and Mrs. Quent, a fantasy novel taking place in England’s fantasy counterpart, which, overall, wasn’t as good as I expected. We’ll gloss over the fact that Beckett is one of those people who insists on misspelling “magic” as “magick” for the same silly reasons that cause people to spell “vampire” as “vampyre” and look at the story itself.

The first adjective that springs to mind about the story is “slow”. In a 498-page novel, the plot – that is, when Ivy meets Mr. Quent – doesn’t start until page 227. All the plot-relevant parts before that point could be condensed to about forty pages. Much of the first two hundred pages contribute nothing to the plot and, quite frankly, are a bore to read – during a thirty page section at the beginning of the story, Ivy gets sick in a way that only delays the plot, is never explained beyond her being “not well”, ends without Ivy learning or doing anything that would have a bearing later in the story, and which a reader could skip entirely without realising they’d missed part of the story. Most of the first half of the book feels like padding, and the side characters get involved in the plot over a hundred pages before the main character.

As for the writing, it could do with being less verbose in parts. It’s a pet-peeve of mine that authors feel the need to avoid two-and-three syllable words in their stories – especially in this book, where Beckett tries his hand at a few jokes or witty turns of phrase that fall quite flat because of the language he uses. I know the book is supposed to take place in an earlier age, but really – we’ll forgive you if you write normally!

Firstly, there’s no real need for the section to be written in the first person. It really just follows Ivy going to meet Mr. Quent and then marrying him, and finding out a couple of plot-related points (really, in this whole section, there aren’t many). Secondly, Beckett does something that’s almost impossible to do well – he gives a reason for that section being written in the first person: that Ivy is writing a theoretical letter to her father (knowing he’ll probably never read it, but doing so anyway). This is one of the flimsiest excuses I’ve ever read for that sort of thing (for the record, the only worse one was found in Davies’ Fifth Business). It also brings up a few questions – namely, why Ivy feels the need to write down Mr. Quent’s appearance, when she already knows it and it’s been established Mr. Quent was a friend of her father’s; why she feels the need to go through every boring detail of her day; and why she insists on writing out things in the form of dialogue and actions, instead of the far more logical “He told me this, this, and that…”

Several times in the one hundred and forty pages, Ivy says, “Oh, how I miss my sisters, and you, Father!” – and in almost exactly the same words every time, too. Yes, she misses her family, and yes, that’s understandable, but we definitely had the message the third time. Ivy also doesn’t stick to her own resolve to conserve detail – she says “Of my journey I need say only a few things. It was long, for one, and consisted of a monotony of creaks and rattles and jolts broken only by those brief respites as the mail was delivered according to its schedule at each stop, keeping always to its timetables whether it was light out or dark.” She then goes on for the next two pages talking about the journey, of which only one collective paragraph really matters, and it doesn’t even need to be there.

There are also one or two contradictions in places. During the afore-mentioned first person section in the middle of the book, Ivy describes a time when she was in danger in detail. She later says she only remembers it through a fog. Finally, she says that she did remember it fully. Now, Ivy doesn’t write down things the night they happen, but Ivy wrote the details of her dangerous escapade a while later – after she said she couldn’t remember it but before she admits to remembering it fully. This is a rather amateur mistake made by people who aren’t very good at the first person – having your character know or remember things they couldn’t have known or later forgot. This is why it would have been better to write it the same way as the rest of the book – you can actually do that in the third person.

We can almost forgive Beckett for that, because he’s clearly not very practised in the first person. Another contradiction can’t be excused so easily, though. Ivy has a brief almost-romance with a man called Mr. Rafferdy early in the story, but doesn’t believe it’ll come to anything because of their different social classes. On page 190, Ivy briefly believes Mr. Rafferdy would propose to her, and “now that a joy she had previously forbidden from her mind and heart was at last allowed to enter, it could only expand rapidly and quickly fill her.” Basically, she feels elated. Naturally the marriage doesn’t go through – the book isn’t called The Magicians and Mrs. Rafferdy. On page 391, though, Ivy says she never admitted to herself that she hoped Mr. Rafferdy would marry her. Well, I’m not sure what Beckett calls her thoughts on page 190, but that sounds like an admission of love to me, and that wasn’t the only one she made.

This brings us to the subject of romance in the book. When it comes down to it, Ivy’s marriage to Mr. Quent makes absolutely no sense. What do they have in common? Nothing at all. How do they feel towards each other for most of the time before their marriage? Ivy, at least, hates Mr. Quent. Oh, she starts to enjoy his company later on, but there’s nothing there that would act as the foundation for a romance. Really, this marriage shouldn’t have happened either – Mr. Quent and Mr. Rafferdy are both nobles and Ivy isn’t, but it’s only Mr. Rafferdy who refuses to marry her for that reason. If she was going to get married to anyone, Mr. Rafferdy would be the better choice – they actually had a bit of chemistry together. Her marriage to Mr. Quent comes off more as a way of getting the plot going, and the way it comes about is drawn-out, awkward, and relies on Mr. Quent being a complete, self-absorbed idiot. (That’s not me being unduly harsh, he says so himself twice.)

A review on the back of the book proclaims The Magicians and Mrs. Quent is a mix of gothic romantic undertones inside a fantasy and mystery. How the reviewer came to this conclusion is beyond me. Beckett writes the romances accurately for the time period the book takes place in, meaning the realisation of love is enough to propose marriage and, as mentioned, relationships are dictated by class, and this, combined with the fact that Beckett covers little of the relationships as they develop, leads to romantic subplots which are anything but gothic and are really quite predictable. As for the mystery aspect, I’m an avid reader of mystery books, and the mysteries Beckett has written into his story are fairly standard for the fantasy genre. The mysteries could have been expanded upon if things brought up earlier in the book were weaved into them, but unfortunately, they weren’t.

Many things come up in the book that seem…almost like they were dropped midway through to make way for Ivy’s storyline. Remember the illusionists Ivy’s supposed to be connected to? They relate to a side-character, but as far as her story is concerned, they might as well not exist. As for rebels that come up in the summary? They play a fairly big role early on, but by the time Ivy’s storyline comes about they’ve been relegated to a side role – though they come into her storyline in a way that’s a bit forced and never fully explained. They then get dropped entirely and a new set of villains come up – on page 424. Naturally the climax falls a bit flat – it only had fifty pages to develop. There’s no real fear of what will happen if Ivy fails to save the world, because it’s never very well explained what will happen if she doesn’t. The ending, overall, isn’t very suspenseful and their victory never seemingly in doubt.

Finally, we come to Ivy herself. As a protagonist, she leaves much to be desired. Despite being a “strong”, “independent” woman, Ivy faints twice for absolutely no reason, gets deathly ill for, again, no reason, and contributes little to her own storyline compared to side characters. It’s said a few times that she’s “quite intelligent”, and only the villains or her enemies every say differently, but I’m afraid her enemies have it right – for someone so smart, Ivy is surprisingly slow on the uptake and asks a lot of stupid questions, and really doesn’t come off as especially clever anywhere. I got rather tired of how she met everyone – even her own family – with mixed feelings, and spends all her time in a funk missing people. She’s established as having a lot of power and is said to be strong and independent, but spends most of her time playing the distressed damsel. The two male side characters were more interesting than she was, quite frankly.

As for suspense, there’s almost none in the book. The dramatic parts aren’t overly dramatic or suspenseful. There are several twists that could have been interesting if they had been written properly, but the astute reader can figure out almost every major revelation several paragraphs – and in some cases several pages – before they happen. As a result, these revelations fall a bit flat when they come up, and the belabouring of the point before that leaves you exasperated as you wait for the characters to come to the same realisation you already have.

And yet…I kind of liked the book. Well, it wasn’t bad. It needs work, yes, but it’s good enough for a light read. It’s fairly ordinary, though – nothing really distinguishes this book from the hundreds of other fantasies in the store, and nothing really makes it stand out. At some point, I’ll pick up the sequel to see how it relates to this book; maybe the series will get better as it goes on.