As 2014 draws to a close, it seemed fitting to look back over the past year and share our favourite reads. There are some duplicates, and there are quite a few we didn’t review… but read on, and share your thoughts!

What If? Serious Scientific Answers to Absurd Hypothetical Questions, by Randall Munroe 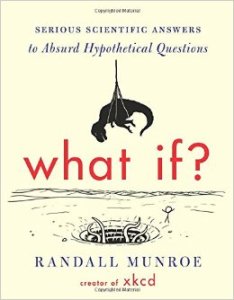 What If? is a good read for scientifically-minded and just plain curious people alike. With often high-end science being explained in a down-to-earth, accessible way, this book is going to make you laugh while also making you think.

A collection of Pratchett’s earliest work, written and published in his teenaged years, Dragons at Crumbling Castle gives us a look into the mind of a young but already skilled author. A true delight for all Pratchett fans, and a must-have for fans of his work.

The Slow Regard of Silent Things, by Patrick Rothfuss 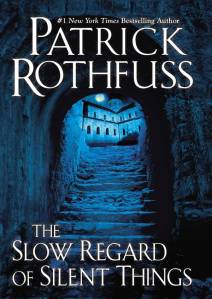 This book focuses on Auri, one of the most relatable characters in The Kingkiller Chronicles, and takes us through a typical week of hers. Rothfuss’ writing makes her odd logic and justifications seem perfectly normal, making this book a delightful read for any fan of the books.

The Undead Pool (The Hollows #12) by Kim Harrison

The penultimate book in her Rachel Morgan/The Hollows series, Harrison is starting to pull all the threads in her series together.  I’ve enjoyed this series from the early days of Rachel leaving Inderlander Security and forming her own office with her partners Ivy (a living vampire) and Jenks (a pixie), to her affair with Kisten (also a living vampire) to solving the mystery of Trent Kalamack and her evolving relationship with Trent.  Witch With No Name (the last book) came out in September, but it’ll be sometime in 2015 before I get to read it.  I anticipate lots of tears, because I hate to say goodbye.

Shattering the Ley by Joshua B. Palmatier

What happens when a feudal lord controls the distribution of ley line power?  Shattering the Ley takes a look at the power structure when magical anarchists break the power of the government by disrupting the flow of power of the ley lines. Kara Tremain is a Wielder, one of the magic users responsible for keeping the ley lines in the channels that power the city of Erenthrall, and keeps Baron Pallentor in power.  Allan Garrett is a “Dog”–a member of the Baron’s Guards.  I enjoyed this book a lot and am looking forward to the release of Threading the Needle sometime in 2015. 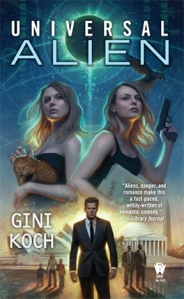 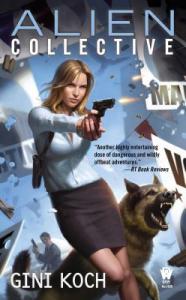 This series is one of my all time favorites, to the point where I try hard not to work on Release Dates.  Kitty Katt is a Marketing Manager in Pueblo Caliente, Arizona who finds out that aliens are indeed on Earth.  The series follows her adventures as she navigates a world filled with incredibly hot aliens, megalomanic humans seeking world domination and friends and family who had hidden part of their lives from her.  This is a wild roller coaster of a series, full of pop references, great music and humor.  The latest book takes an almost “Freaky Friday” twist with Kitty Katt trading places with a multiverse alternate.  Both Kittys have skills the other needs to solve problems in their respective universes, and each helps the alternate universe get to the bottom of a plot of a “Master-Mind” bent on World Domination. Alien Separation is due out in May, 2015. 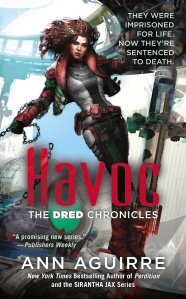 The second book in her Dred Chronicle (which is set in the same universe as her Jax series), continues the struggles of Dresdemona “Dred” Devos and her felonious followers.  Not only does Dred have to keep a step ahead of the other factions on the prison station Perdition, but when mercenaries land on the station, with the blessing of the Conglomerate, to take control, she finds herself battling her own people to remain in power.  Aguirre has created a situation fraught with tension that keeps me on the edge of my eReader.  The next book Perdition is due out in Fall, 2015.

The Winter Long by Seanan McGuire 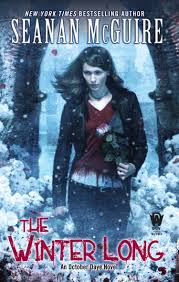 The latest in the Toby Daye series, The Winter Long answers a lot of Toby’s questions about her past–as well as challenging what she thinks she knows. Gritty urban fantasy series about Elves in the San Francisco area.

Out of Tune edited by Jonathan Maberry

A collection of short stories inspired by English/Scottish/Irish (and even one American!) ballads, I’d been anticipating this collection because Marsheila Rockwell and Jeffrey J. Mariotte have a story in it.  Plus, I love the old ballads, ever since high school, when I was in a production of ‘Dark of the Moon,’ based on the song Barbara Allan (which has a story in this collection!).  The stories in this collection are mild horror and/or gritty fantasy and all are fantastic.  Other authors in this collection are Seanan McGuire, Keith R. A. DeCandido, Kelley Armstrong, Jack Ketchum, Simon R. Green, Christopher Golden, David Liss, Gregory Frost, Jeff Strand, Lisa Morton, Nancy Holder, Del Howson and Gary Braunbeck.  As a bonus, there’s commentary on the ballads by folklorist Nancy Keim-Comley. 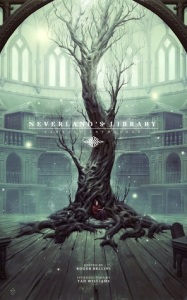 Have you ever picked up an anthology because you wanted to read one story by one author (or, in my case, one story by writing partners)?  You read that story, then decide to go ahead and read the rest of the anthology and you realize just how much awesome is included in one tome.  Yeah, that’s what this anthology was for me.  Although loyalty dictates that I state that ‘A Soul in Hand’ by Marsheila Rockwell and Jeffrey J. Mariotte is my favorite, but there were so many good stories that it seems almost unfair to single one story out.  Other authors include Mark Lawrence, J. M. Martin, Brian Stavely, Tim Marquitz, Kenny Soward, Betsey Dornbusch, Stephen McQuiggan, Keith Gouveia, Jeff Salyards, William Meikle, Ian Creasey, Mercedes M. Yardley, Peter Lawlik, Joseph Lallo, Teresa Frohock, Don Webb, R. S. Belcher,  Maire Brennan and Miles Cameron.  Forward by Tad Williams.

Clockwork Universe:  Steampunk vs. Aliens  edited by Joshua B. Palmatier and Patricia Bray

The premise behind this anthology is “What if Aliens showed up during the Victorian Age of Steam (or at least during the literary sub-genre of Steampunk)?”  I’ve loved Steampunk, ever since I played Space: 1889.  Another anthology that I bought for one story (Gini Koch’s ‘A Clockwork Alien’), but I really enjoyed the other stories included, most of which were written by authors I hadn’t read before.  This is a 14 story collection that brings together the imaginings of Ian Tregellis, Leah Cutter, Bradley P. Beaulieu, J. R. Hargenrader, Gini Koch, Jason Palmatier, C. B. Pratt, Jean Marie Ward, Tansy Rayner Roberts, Gail Z. Martin and Larry N. Martin, David J. Fortier, Brad Haffer, S.C. Butler and Seanan McGuire.

This was the main book that I was looking forward to reading this year. The sheer scale of the world that Sanderson created in the first one The Way of Kings, and continued in Words of Radiance was enough to me want to read the 1000+ page book. On top of that, there’s the dynamic characters, the fascinating magic system, and the dozens of plots that are interwoven through that many characters, interludes and everything else. This novel was hands-down my favourite novel on the year. (One that I’ve just discovered that I never reviewed. This will be remedied in the near future).

The Goblin Emperor by Katherine Addison

If you haven’t read this book yet, go do so. Now. It’s a breath of fresh air, admist the reign of grimdark fantasy. The Goblin Emperor holds steady with a hopeful tone throughout, with characters that are charming, kind, and likable. This is a unique, and well-written debut novel. Some of the writing takes a bit to get used to (the characters using formal language and the royal “we”), and some of the names of things are a bit overly long and complicated, but the book doesn’t disappoint. As far as I’m aware, The Goblin Emperor is a standalone, so you won’t be left waiting for a couple years for a continuation to the series. 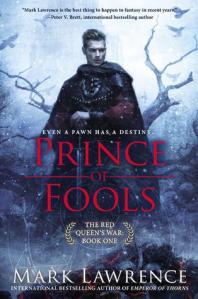 Set in the Broken Empire, Prince of Fools follows the story of Jalan Kendeth instead of Jorg. I can’t fully remember everything that I intended to say about this, however– despite being terribly jetlagged, and having just gotten to my hostel after 16 or so hours of travelling, I spent much of that night reading and finishing Prince of Fools, instead of getting some much needed sleep. Jalan is a dark-humoured prince, who muddles through to glory, alongside his companion, Snorri Ver Snagason. I found the pair to be enjoyable to read, even more so than Jorg.

— In lieu of having too many repeats, I’d just like to quickly mention: Skin Game, The Slow Regard of Silent Things, Neverland’s Library, and What If? 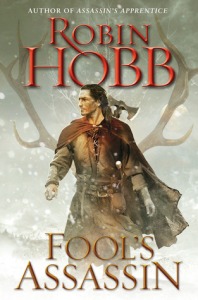 I’ve been waiting for the conclusion to Fitz and the Fools story for over 10 years now. This was the beginning of what is going to be a bittersweet ending for me. Every story has to end, but I began reading this story so long ago I don’t want  it to.

Closer to Home by Mercedes Lackey:

I adore Mercedes Lackey and her Heralds of Valdemar books. I credit her and them with my reading, and this continuation of Mag’s story is a good example of why I love them so much. It is well written with so many enjoyable characters and an immersive plot, I wasn’t able to put it down from start to finish. 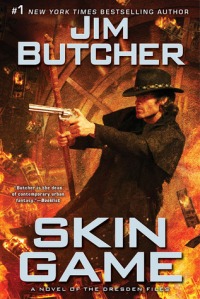 With Skin Game we finally move away from the story line started in Changes that spanned three whole books. Harry starts to get back to his normal (For him) life, with his friends and family, and sticking his neck out for the world on a day-by-day basis. He’s an idiot about women and doesn’t know when to stop, and for that I love both him, and Jim Butcher for creating him!

Words of Radiance by Brandon Sanderson

Brandon Sanderson’s Stormlight Archive has quickly become one of my new obsessions. Words of Radiance shows why my faith in him is well placed. It’s such a good book, with so much history and thought put into it that it is a little scary. 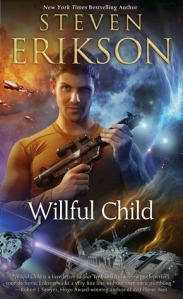 I honestly didn’t expect to enjoy this book all that much, mainly because I am not a huge fan of Erikson’s Malazan series. So I am a little surprised that I can say I absolutely loved this book, it made me laugh so hard at times I started to choke and tear up. To me there really isn’t anything better than a book that can really make you laugh.

What were your favourite reads from 2014? Let us know in the comments below!