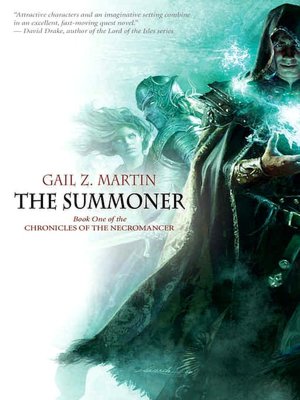 Thrown into chaos, the aristocracy of the Winter Kingdoms must defend itself against magic, and with the clock ticking, the fate must rest on the shoulders of our heroes.

Matris “Tris” Drayke, a Prince of Margolan must flee from his older brother Prince Jared and his evil sorcerer Foor Arontala, after the slaughter of his family. Now a fugitive, Tris must travel with his friends and seek justice, and a way to save the kingdom. Along his quest for retribution, he must learn to control his powers before they control him, and call upon the armies of the dead

Kiara Sharsequin, the Goddess Blessed Warrior Princess of Isencroft must find a way to save her self, her kingdom and her father from Foor Arontala — a dark wizard, and from King Jared, to whom she is betrothed. Searching for the answers, she must set out upon a Journey; one of hardships, self discovery and truth.

The Summoner is the first book in the Chronicles of the Necromancer by Gail Z. Martin.The story started out a bit slowly; the first chapter and a few other spots seemed to be info-dumps more than anything; telling the reader more than actually showing. However, it quickly picks up the pace and sets the story in motion, continuing with minimalistic details, as Martin focuses more on advancing the story than a detailed analyses of each character. Moving the story at a fast pace and always keeping it interesting.

The Summoner is a cliché. The good guys are all charismatic, likeable, and filled with ideas of heroism and only a small flaw or two to make sure they aren’t too perfect or unrealistic. Meanwhile the bad guys are distinctly unlikable, and pure evil — it being impossible to muster up a bit of sympathy for their cause. This book is a prime example of a formulaic sword and sorcery fantasy novel — a wicked prince and evil magician, haunted inns, ghosts, prophetic moments and magical powers which conveniently save the day every time and if not, a ghost will tell the hero what he must do. Martin doesn’t bring anything new to the table that we haven’t seen before, and as the first book in a series I kind of expected something a bit more special.

Despite this, I enjoyed the book, and I’ll be reading the sequel to it — The Blood King. Martin isn’t flashy or overly elegant with her prose, but she doesn’t need to be. It’s a story we all know, and one that many fantasy readers enjoy. It’s easy to get through, and it lets us revisit familiar territory. The characters don’t brood, or go through the “woe is me” monologues much, they know their paths, and are well aware of the challenges they face. So, despite being a cliché fantasy title, and more on the predictable side, it’s a light read, and enjoyable.

Do I recommend this book? Yeah, sure. Why not? If you like the typical fantasy story with magic and heroes, adventure and battles, then you’ll probably like this book as a light read.