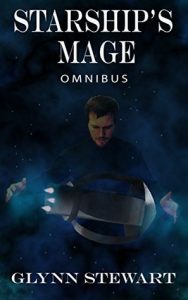 In a galaxy tied together by the magic of the elite Jump Magi, Damien Montgomery is a newly graduated member of their number.

With no family or connections to find a ship, he is forced to service on an interstellar freighter known to be hunted by pirates.

When he takes drastic action to save the “Blue Jay” from their pursuers, he sets in motion a sequence of events beyond his control – and attracts enemies on both sides of the law!

I remember seeing this book on Amazon back in 2013 where it was being released in episodes, and I was going to pick up each episode as they released but I kept putting it off until I completely forgot about it. Fast forward three years and I stumble back across them in Omnibus form while looking for something to listen to on Audible. I really had no choice but to purchase it and I’m more than glad that I did. Starship’s Mage: Omnibus by Glynn Stewart was an exciting and action-packed read that I was completely engrossed in from beginning to end.

I’ve seen a lot of books come out over the last few years that mix science fiction and fantasy and I found them a bit odd in the beginning. However, it’s a genre that has slowly grown on me and I don’t think I’ve read one yet that combines the two genres as much as Glynn Stewart has managed to do. I think one of the best things about Starship’s Mage is the perfect balance between science fiction and fantasy that Stewart has been able to attain. Add to that a cast of fantastic characters that you really start to care about and a great story line and I think you have a really good book that is well worth the time and money to read.

The only real complaint I can think of is that over the course of the book they kept changing how they referred to the captain of the Bluejay. It changed between his first name, last name, and captain throughout the book, sometimes all three in the same scene and by the same person. It drove me a bit crazy a time or two. Other than that I thought it was great.

Since I bought the audiobook version of Starship’s Mage: Omnibus, I should probably touch on the narrator at least a little bit. My thoughts are pretty straightforward — Jeffrey Kafer does an amazing job narrating the book. Every character has their own voice and you can really feel the emotion in the characters voices in every scene. Normally when I listen to an audiobook I’ll set the speed to x2, but I didn’t have to do so this time. I thought the narration speed was just perfect, and I’ll definitely look for more books narrated by the same person.

I’m really looking forward to starting the next book and I hope that this ends up being more than the three books that are currently available.