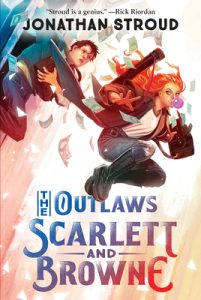 Scarlett McCain is an outlaw, a bank robber and a sharp shooter–a girl of formidable skills. Fueled by a tragic injustice in her past, she travels the broken kingdoms of England alone, carrying out daring heists in the surviving towns and fending off monstrous beasts in the wilds outside their fortified walls. Her life is dangerous, free, and simple–until she finds a wrecked bus on a lonely road. Albert Browne, the sole survivor of the accident, is a seemingly innocent and harmless youth. Against her better judgement, Scarlett agrees to escort him to safety.

This is a mistake. They are soon pursued by men with dogs and guns and explosives. Scarlett is used to running from the law, but these trackers are the most skilled she’s ever encountered–and they don’t seem to be after her. Just who is this Albert Browne Scarlett must uncover his shocking secrets if either of them are going to survive.

I’ve been a huge fan of Stroud’s Lockwood and Co. series for years now so I was ridiculously excited when I saw that he had a new book and series releasing. I can still remember sitting down with my book and a cup of hot chocolate all prepared to lose myself in a good book for a chunk of the day. So it almost hurts me to say that I really struggled to get into The Outlaws Scarlett and Browne and at this point, I’m honestly unsure if I am going to read any of the other books in the series when they release.

Normally I would be really disappointed that I didn’t like a book by an author I’m a fan of but honestly it just means I’ll go back and reread all the Lockwood books over again since it’s been a while since I have. I’m sure most people who are fans of Strouds will love this book but I just don’t think it was for me.