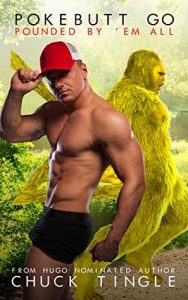 Torbit is worried. After witnessing a slew of dazed roaming men and women buried in their phones, he’s beginning to think that this might be the start of a terrifying zombie film. Upon further investigation, however, Torbit realizes that they are all playing a hot new mobile game, Pokebutt Go.

Curious to see what all of the fuss is about, Torbit plugs in and sets out to capture a nearby Pokebutt within his own balls, but when he arrives at the location of this rare beast, Torbit suddenly realizes that he might have bitten off more than he can chew.

Now face-to-face with a handsome yellow bigfoot named Peebaroo, who sports a zig-zag tail, Torbit realizes that the only way to catch this majestic creature… is within the depths of his own butt.

I laughed pretty hard when my co-blogger first showed me this short story, the titles to Chuck Tingle’s stories and the fact that they even exist really amuse me. So when she jokingly (I’m assuming it was a joke, but you never know) asked me if I would review this if it was given to me I think I was pretty quick to say yes. I was originally going to rave about this book, give it the best review I’ve ever given a book. I was going to compare it to some of the greatest books of all time. I just can’t bring myself to do it.

While the story may be only 4000 words long, fans of Tingle’s works will be happy to know that there is a bonus story included with the ebook of Pokebutt Go.

Oh, and Rebecca, that’s the last time I let you convince me to read gay erotica for the blog.